“We certainly saw how people had responded to Until Dawn, especially on streaming sites. That inspired a lot of the direction we’ve taken with the game.”

Supermassive Games has been around since last gen, dabbling in the creation of downloadable content for LittleBigPlanet among other minor projects, though 2015’s Until Dawn was their breakout hit. The developers saw Until Dawn transform into a party game due to its decision based gameplay that could result in either all or none of the eight playable characters dying.

This group-centered environment induced by Until Dawn’s mechanics heavily informed the design of Hidden Agenda. Whether that change in direction is for the better isn’t my place to decide as the developers have made it clear through interviews and trailers that the multiplayer “competitive” mode is THE way to play the game. Well, I have no friends so I have yet to try the multiplayer mode myself, but that’s not what this article is for.

Rather than writing a traditional review of Hidden Agenda because I have not experienced it properly, I aim to figure out how well it stacks up as a single player experience through the game’s “story” mode. Not everyone interested in this game may want to play with friends. They’d prefer an isolated experience in a similar vein to Until Dawn. Before starting the analysis, it’s worth noting the price. Launching at $20  after Until Dawn‘s full fledged $60 price tag in 2015(which can now be had for $20), it’s clear that Hidden Agenda is a budget title and should be treated as such.

First impressions for the single player gamer are not strong. Even if you want to play by yourself, you are still required to download the Hidden Agenda app for your smartphone. Don’t worry. It’s free, though using this app, as you’ll soon find out, is a price of admission not worth taking. Both the system and phone have to be connected through the same wifi network before they can be synced. The game is played entirely through this app, a design decision that ultimately hampers the single player experience, transforming it into a hollow shell devoid of any potential it might have had. The already simple mechanics of Until Dawn are streamlined even further. Players never physically control either of the protagonists in a three dimensional space. Instead, the three modes of control consist of:

On paper, crime scene investigation seems like the most interesting use of the playlink technology powering the game until you realize how shallow the experience is. Every crime scene consists of a single still frame with three pieces of evidence scattered about the scene. Crime scene investigations are timed, which when utilized properly, should add a sense of pressure that only video games can provide. However, instead of being a tense race against the clock, these scenes devolve into tedious wrestling matches against the unresponsive touch controls. Through the entirety of the experience, all decisions and mechanics are enabled through the use of an on-screen pointer that corresponds to your finger on the phone. Crime scenes use this pointer as well. This is where the game begins to fall apart. The second you identify a clue, the stupid app has a schizophrenic attack and loses the normally adequate, though not ideal, level of response for at least 2-4 seconds, wasting your time in the process. I did not time the crime scenes myself, though they are all definitely expected to be completed within a window of under thirty seconds. 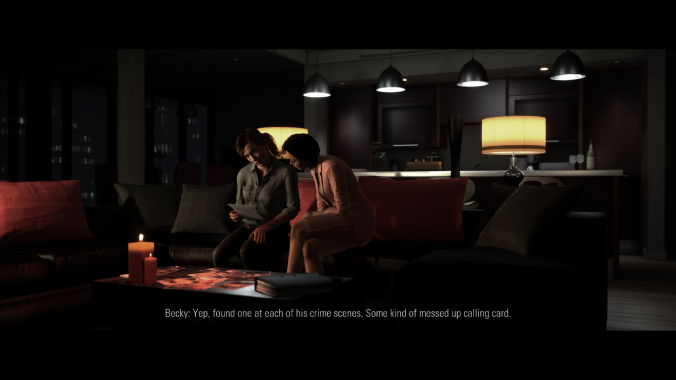 The developers recognized this shitty technology and accounted for that. Guiding the pointer in the general direction of a clue highlights a gigantic magnifying glass, immediately giving away the item of interest. It’s a cop-out that would have been unnecessary if the app worked as the developers claimed or better yet, if gamers that know how to hold a controller were given the option of using one. Quick time events are similarly unresponsive, explaining why every QTE prompt slows down the action to give you enough time to wrestle with the controls. Even then, bringing the pointer close enough to the desired QTE box magnetically pulls it in. This design deficiency also adversely effects simple binary decisions. Often, when laying my finger on the phone, dragging back and forth, the pointer would magnetically teleport to the undesired choice, leaving me at the mercy of the playlink technology’s incompetence.

“We haven’t had any problems with latency and so forth. We’re comfortable with the fact that we have quick-time events in the game and timed choices, and that’s caused no problems at all…We haven’t at any point had to think, ‘We can’t do that because of latency.’ It just works.“ Be careful dragging your pointer around curiously. The shit controls might make the decision for you against your will.

While control is limited, thereby inhibiting the level of player agency you’d expect from a game of this nature, Hidden Agenda does at the very least exceed Until Dawn in one key area: Presentation. In the move from an earlier version of the Decima Engine circa Killzone: Shadowfall to Unreal Engine 4, Supermassive Games has crafted one of the most visually impressive games of the generation. Despite being two years old, Until Dawn remains one of the best looking current gen games, with Hidden Agenda pushing far beyond that. Noticeable improvements to lighting, materials, and character models are integral to making the experience that much more immersive, a necessity given how lackluster the narrative is.

Hidden Agenda is far from a compelling story. The plot is poorly paced with characters having very little room to develop. It’s perhaps a byproduct of the two to three hour length better suited to film combined with the inefficiency of a script that feels as though it was written for a much longer game. Until Dawn was not cinematic genius, but it wasn’t trying to be. Hidden Agenda doesn’t aspire to be Citizen Kane either, though with the anemic length and lack of player agency, the game’s success hinges entirely on its narrative and when even that feels bare bones, there’s a problem. Filled with some of the most obtrusive scene transitions I have ever witnessed in any piece of entertainment, even Tommy Wiseau would be more capable of tying scenes together.

The basic plot holds promise for an interactive narrative. It centers around a serial killer that is sentenced to death for a series of murders dubbed the “trapper” killings due to each victim being rigged with a trap that kills first responders. The mystery and motives surrounding these murders has the potential to elicit unique gameplay encounters and enable morally ambiguous player choice. What we are left with is a poorly written story devoid of a legitimate sense of agency and filled with mostly binary decisions that do little to stimulate the mind.

Hidden Agenda is a botched attempt at capitalizing on the legacy the studio started to build with Until Dawn. In its chase for the casual group-think crowd, Supermassive Games has crafted a shallow experience. While it may very well be a fun game to play with a group of friends over some pizza and drinks, it’s almost insultingly empty for the single player gamer. With that said, Hidden Agenda is still worth looking into for devout proponents of the narrative potency of video games. While it may be a “failure” incapable of competing with proper crime/thriller films and television shows, it’s commendable that the developers took a risk in an industry so averse to experimentation. There are worse ways to spend $20. After all, you could end up finding a used copy of Final Fantasy 15.