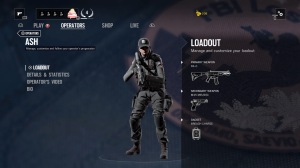 A little over a year on from its release with a second year of confirmed support, Rainbow Six Siege has survived its launch woes and cements itself as one of the best shooters of this generation.

Rainbow Six Siege has been able to captivate me in ways no other game has. Its greatest strength lies within the methodical pacing. Each match lasts only a handful of minutes, and combined with the low player health and lack of respawning, that makes each second crucial.

The difference between winning or losing a round can sometimes hinge upon whether or not you happened to be aiming at the right location at the right time. In spite of this time sensitivity, a lot of game time is spent waiting. Whether a player is laying prone in a corner or has punched a hole in a wall for a new line of site, situational awareness is paramount to success. Running in straight to the objective with reckless abandon WILL get you killed.

Success requires patience. Oftentimes, even more tense than a firefight is a tango between players on opposing sides of an obstruction. Player 1 is repelling down the side of a building. Player 2 hears the rope and makes a quick sprint toward a corner by the window. Player 1 hears these footsteps just before deciding to charge through. This leads to a mindgame mimicking a balancing of power.

This constant balancing of power between humans players with only one life nestled deep within the micro-level destruction creates a dynamic no other multiplayer game aspires to. No other game this generation has made the simple act of slowly turning a corner feel so incredibly tense and dire.

Both players are scared for their lives, but just one slight move can turn the tide of battle. Perhaps player 1 has a flashbang, but should he/she risk shooting or punching a hole in the window to allow space for this flashbang to enter through? Doing so might give the opponent just enough of a reaction time to gun him/her down.

Because of the nature of Rainbow Six Siege‘s mechanics, underlying structure, and game flow, more than half of your total play time will be spent scouting for information through drones or cameras, sitting in silence, listening for sounds, or dancing back and forth between an opposing player until one dies or retreats.

It is one of the most satisfying games to play in this day and age. Yes, it’s got its fair share of bullshit like any multiplayer game in existence, but when a game plan goes right, Rainbow Six Siege enables a specific kind of power fantasy rarely seen in gaming.